I was crazy busy Wednesday, which marked the first time during the entire experiment that I didn’t actually make it to the OG. Sad, if it wasn’t for the copious amounts of OG food that I have in the fridge and the freezer. I should have taken a picture – I think I have five or six frozen bowls of soup in the freezer, some bags of breadsticks, and who knows what else. Anyway, I woke up Wednesday morning and found this in the fridge.

I guess I ate more than half the pasta the night before, and also picked out all of the shrimp fritta. What do you do when life deals you lemons? 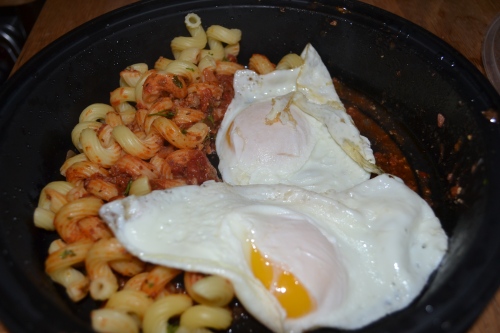 Make an authentic Italian brunch! And yes, my easy-over game is on point.

Today I wasn’t that hungry, so I ended up getting soup at the OG and taking my pasta to go.

The chicken gnocchi is interesting – it’s a delicious soup if a bit on the salty side, but the problem is that if you dip a salty breadstick into a salty soup, it’s a little too much salt. The texture of the soup is perfect for dipping, but I kind of wish I had an unsalted breadstick to dip in it.

Unfortunately, these guys do not come unsalted.

This was the pasta that I took to-go. Whole wheat linguine with chicken fritta. Fresh chicken fritta is CRAZY delicious, although it’s one of the worst toppings to eat later because the crispiness of the breading has quite the ephemeral half-life. But for the moment, let’s just appreciate how amazing that piece of chicken in the middle looks. I’m not sure I’ve ever had the whole wheat linguine at the restaurant – maybe it’s something I should try before this whole thing ends. About a week and a half left! I’m not going to lie, part of me, maybe even a majority of me, will be pretty happy when the pasta pass ends. I still love pasta, I just miss eating other foods. It hurts to walk by a Popeye’s every time I walk to the OG.

Also, I weighed in at 176 today. Is the carb binge finally catching up to me? Probably not, I think it’s water weight from all of the soup I’ve been eating lately. We’ll see if it’s sticking in a few days. Cheers!