Everyone keeps asking me if I’m sick of pasta yet. The answer, maybe a bit surprisingly, is no – the problem isn’t that I’m sick of pasta, it’s more that I miss eating other things. I walked by a hot dog stand yesterday and I really wanted a hot dog, but knowing I was just an hour or two away from a meal at the OG, I couldn’t really justify it.

Monday morning, I still had a leftover breadstick and a sausage from the weekend, so I threw together another sausage sandwich on OG breadstick for breakfast with the rest of the leftover peppers and onions. This must be at least tangentially the product of my hot dog craving.

Not as good as when it was on the Amoroso roll, but in other ways it was better because the breadstick was nice and salty on the outside. If you ever wondered if you could re-heat two-day old OG breadsticks, the answer is a resounding yes! 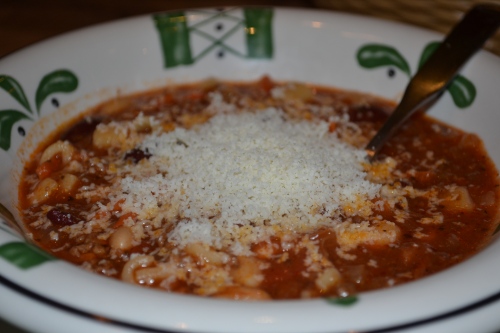 Went into the OG for a late lunch Monday. Decided to have some soup and breadsticks, and to take my pasta to go for dinner. Started with the pasta fagioli naturally, lots of cheese.

I actually got a bowl of the zuppa toscana too but I forgot to take a picture because an old friend who I hadn’t talked to in a few months called. The zuppa toscana may actually be supplanting the pasta fagioli as my favorite soup – the fagioli is much more consistent, but when they get the zuppa toscana right, it’s pretty delicious. The problem is it’s not always consistent – sometimes it’s on the bland side, other times the potatoes are cut into these massive wedges and they don’t get cooked all the way.

Had about half of this for dinner, and the rest for breakfast. I think I’ve had nothing but OG food for about four straight days now.

Busy day today so I got my entire order to go. 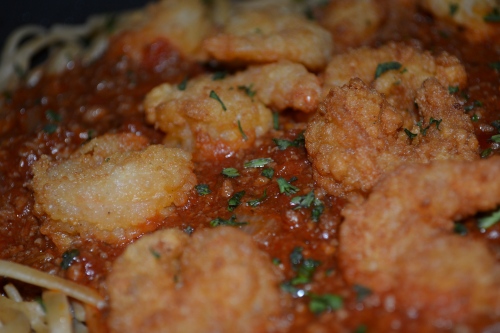 Deep fried shrimpy goodness. It’s really too bad the OG sold off Red Lobster – they could have eventually opened up one of those combination restaurants, the way KFC/Taco Bell sometimes combines restaurants. Can you imagine how ridiculous a never-ending pasta bowl + endless shrimp would be? Sign me up for 49 days of that craziness.

Yesterday was another milestone – I’ve now spent more on tips than I have on the pasta pass itself. Also, I’m under $7 a meal now! Speaking of tipping, I’m now of the belief that when you get takeout from a dine-in restaurant, you should leave a buck or two even if you’re taking out. I don’t tip when I pick up Chinese food or pizza, since those are primarily takeout establishments and the tips wouldn’t go to the workers anyway, but at least at the OG, there’s a dedicated person being paid the tipped minimum wage of $2.83 who has to spend that hour (or more) bagging food for very few tips. Just leave a buck or two, it means a lot more to them than it does to you.

Calories consumed: Not counting anymore, because it clearly doesn’t matter and has no effect on my weight

Comments from the wife: Hey look, our boobs are the same size now!