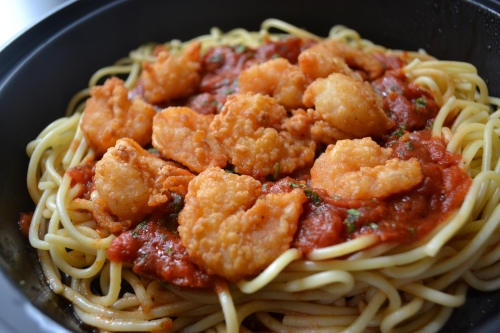 Holy mother of Italy, look at the size of those shrimp! Whoever’s back in the kitchen working the deep fryer knows what they’re doing. Not only are they battering these jumbo tiger prawns perfectly, but they’re keeping that oil sizzling hot for a crisp, deep-fried experience nonpareil. It’s making me seriously crave some of the other deep-fried appetizers on their menu. Every time I sit at the bar for lunch, I see a few people ordering either the fried calamari or the sampler italiano (your choice of three deep-fried delicacies). Also, I doubt I’ll make it through the 49 days without ordering the lasagna fritta at least once. Yep, that’s right, deep fried lasagna. Some of you may be scoffing, but anyone who’s spent some time in St. Louis can tell you about the joys of deep-fried ravioli.

I had to get takeout again and store my little precious in the fridge, but when it came time to eat, I was faced with a conundrum. Scylla was that the spaghetti was cooked perfectly al dente, but six hours in the fridge had made the noodles and the shrimp cold. Charybdis was that if I were to microwave the whole thing, the entree would then be piping hot, but the pasta would get overcooked. I previously experienced this tragedy with the cavatappi with five-cheese marinara – everything came out hot, but the pasta was now overcooked. What to do? Had it not already been 11:30 at night when I was faced with this dilemma, I would have gone for option 3 – carefully move everything into a pyrex, top with shredded mozzarella, then bake the whole damn thing into a cheesy gooey delicious mess.

Turns out my concerns were unfounded, and Olive Garden wins again. For some reason, zapping the cavatappi violently overcooks the pasta, but the spaghetti actually holds up remarkably well to reheating. The lesson learned here is that for takeout cuisine, spaghetti pasta reigns supreme.

Another thing I’ve learned – when I first started this project, I doubted I would get the marinara very often, especially once I discovered the spicy three meat ragu. After all, when you have one option, and then another option which is basically the first option plus meat, the option plus meat is always the correct answer. What I underestimated were the brilliantly ripe tomatoes imported directly from Pope Francis’s own personal garden. The chunks of tomatoes make the “plain” marinara sauce by far the best dipping sauce for the breadsticks, which is an important quality. By the way, how awesome is that new pope! He must eat at the Olive Garden a lot. Way better than grumpy old Benedict, who probably spent most of his time slumming it at Sbarro.

I ate my veggies too, I swear. I also figured out why I like their salad so much – red cabbage! Cabbage should be a much more frequent participant in Western salads.

One Comment to “Day 8 – Spaghetti with Marinara and Shrimp Fritta”